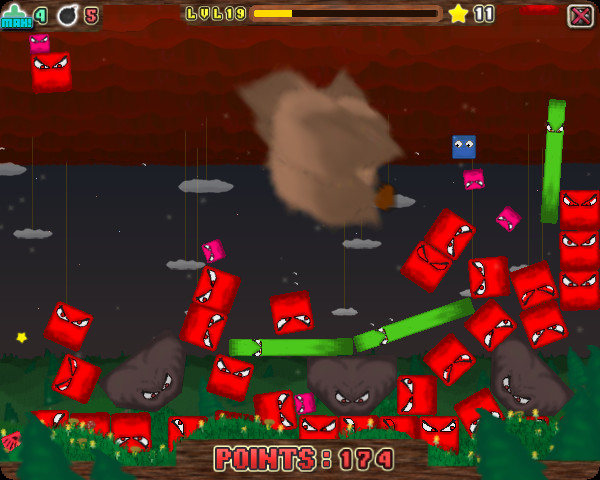 Boom Box Blue! is a pretty simple arcade game with a major focus on physics. Control a blue box as the title emphasizes and try to avoid mean blocks out to kill you. This leads to a Tetris-esque experience while dodging everything thrown at you, but at least you have bombs, right?

If you’re looking for the sort of game you’d find on a flash video game site like Kongregate or Newgrounds, then Boom Box Blue! is of that same caliber. For the price of $.99, you can’t expect too much from it. But, it is a neat game you can get a little time out of if you have nothing to do.

As the Hero Box, you control it with your mouse and drag around the screen to collect stars to level up. The leveling system centers around upgrading skills to get more health, bombs, stars, etc. to progress further. The longer you survive, the tougher blocks you’ll get, the faster it speeds up, and the overall difficulty increases.

The difficulty is balanced rather well, so I’ll give VaragtP credit for that. For each block you hit, you lose 1hp, but hamburgers fall out of the sky that give health. The hamburgers tend to show up at the same speed as the tougher blocks do. This provides a good opportunity to stay alive, regardless of what your skill may be.

Someone who doesn’t have the reflexes for this speed of a game isn’t screwed, they just need to lose a few games to get their upgrades going. Unfortunately Boom Box Blue! has some obvious issues likely from its low production value. Graphically certain areas are blurry, like the menu screens, and some items such as the bombs you drop. Something as simple as a slick menu screen is instead blurry and that’s not a good look.

VaragtP further emphasizes that this is a simple game you’d find on your phone or on a flash game site. There are no options and only a mute button for all sound. It’s frustrating having a forced resolution for the wrong aspect ratio.  You can’t lower the music or sound if it’s too loud. You can’t even quit the game unless you lose a run. There’s no menu screen aside from when you first start Boom Box Blue! Simple features like these should be the minimum regardless of the production value.

Boom Box Blue! Has Blocks of All Shorts

The variety of block types I ran into is neat to see. I came across five different ones each with their own unique shape or ability. From the basic red blocks flooding my screen to the tiny bouncing pink ones, that ruin my day! Power-ups also change the gameplay by speeding it up, slowing it down, making the Hero Block smaller, etc.

While not the worst thing, anytime you level up or a new block appears or a power-up in effect, it throws text on your screen. Having your entire screen taken over by a ray of sunshine and large words is both irritating and distracting. This alone is enough to take a couple of hits, especially early on when you barely have any upgrades.

Fighting For the Top 10 Leaderboards

The leaderboards provide a goal to try and beat others, sadly only showing the top 10. Fortunately, there’s probably not all that many people playing it, so it shouldn’t be too tough to bump into that top 10. However, it would be nice to see what your rank is, for those of us who aren’t able to break it.

Boom Box Blue! isn’t some incredible fancy game you’d find on Steam. But when you remember that it’s only $.99, it’s a solid game for that price. I wouldn’t buy it unless you sell trading cards on Steam to get it. It’s only worth 30 to 60 minutes of entertainment before it loses its value.

Boom Box Blue! was provided by the developer via a Steam code.